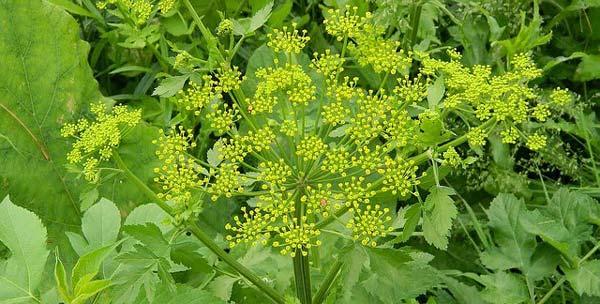 Don’t Get Burned: Get to Know One of Minnesota’s Invasive Plants

All winter long, we Minnesotans fantasize about the things we’re going to do once the weather gets warm. The thought of fishing, boating, hiking, biking and dozens of other activities gets us through the cold winter and form the bucket lists that make Minnesotans such avid outdoorspeople. In Minnesota, when we talk about invasive species, we tend to think of our lakes, but in Southeastern Minnesota especially, a new land-based invasive species threatens to put the burn on that recreation—the wild parsnip plant.﻿

Present across Minnesota, but with the only large concentrations found in in the southeastern part of the state, wild parsnip is a relative of the Giant Hogsweed plant, another invasive species traditionally found in the eastern United States. Looking very much like some kind of dill with clusters of yellow flowers sprouting from tall stems, this noxious weed is native to Europe and Asia and a close relative of the traditionally cultivated parsnip. It spreads quickly through ditches and disturbed areas such as adjacent to farm fields and groomed prairie trails. It’s extremely dangerous if touched. The juice of the plant reacts with sunlight to create painful, blistering burns on the skin that can scar permanently.

My first encounter with the plant was about five years ago near the streams at Whitewater State Park. My fishing guide warned me about the plant and advised me to bring a pair of long, coated gloves and wear long pants. Despite my best efforts to avoid the abundant plants, at one point I lost my footing going down the embankment to the stream and, in reaching to steady myself, the edge of my hand came in contact with the base of the stem of a parsnip plant. I wasn’t sure at the time that it was wild parsnip, but as a precaution I immediately washed my hands in the stream. Without soap, it was a gamble to hope that I’d removed any juice. Unfortunately, it’s a gamble I lost. Small, burning blisters appeared by the next morning, but my exposure was minimal and some salve and a bandage were able to heal me within a couple of days.

Others have not been so lucky. In recent years, more and more cases have surfaced in the area. State and county parks and MinnesotaDepartment of Transportation (MnDOT) have issued warnings about its toxicity. WhenI see the season peaking, I steer clear of areas where I might have to contend with it, which seriously limits access to some of my favorite trout fishing spots along the streams. I know avid hikers and campers who avoid the area for much of July because of the risk to themselves, pets, and children.

Dealing with the problem

Many are doing their best to combat the spread of this hearty, resilient weed, particularly in recreational areas. Whitewater State Park holds an annual volunteer pull around their campgrounds and along the trails, eliminating thousands of plants and creating a diminishing return of the plant in subsequent years. MnDOT has changed when staff mows ditches in the area. There are actual ditch mowing laws in place for landowners that I’ve seen enforced along state highways by citations from the State Patrol. And, of course there are those of us who use the parks and trails doing our part as good stewards by safely pulling the plants as we find them. But the problem is so widespread that it can only be managed, not eradicated.

Perhaps this species, like other invasives, will exhaust itself by overpopulating and years from now we won’t have to tread carefully to avoid contact with this dangerous plant. In the meantime, I’ll give you a friendly heads-up from Southeastern Minnesota: while I hope you come down to experience its beauty and all it has to offer, wait until after July or consider packing a pair of rubber gloves.

For questions or comments, please contact Anna at anna@conservationminnesota.org