My First Time In Cuyuna Country

As the Public Land & Outdoor Recreation Program Manager with Conservation Minnesota, I’m interested in learning more about how outdoor recreation can help communities economically while creating an identity and inspiring passion. That’s why I’m sharing what I experienced and learned during my visit to Cuyuna Country.

It was about to rain as I pulled into the Sagamore Unit of the Cuyuna Country State Recreation Area, the newest addition to the popular and highly successful Cuyuna Lakes Mountain Bike Trail system. According to Aaron Hautala—former President of the Cuyuna Lakes Mountain Bike Trail Crew and one of the key advocates for the trail system expansion—it’s the number one visited state recreation area in Minnesota, beating out number two by 198,000 visitors annually.

I had preconceived notions of how important and special this place is, but I was not quite prepared for what I learned throughout my trip to Cuyuna Country. Before heading to lunch with Aaron and the grand opening of the Sagamore Unit—which includes a 7-mile adaptive hand cycling trail—I stopped at Crosby Memorial Park to get some pictures of the infamous Sea Serpent. The City of Crosby is on the shore of Serpent Lake. I first noticed a group of mountain bikers hanging out by the sculpture. I mentioned to them what I was doing in town, and they quickly told me how amazing the trails are and how much Crosby has boomed economically as a result. This is something I continued to hear throughout the day.

Despite the souring weather, a large group of people were gathered under the freshly constructed shelter. Department of Natural Resources staff, Cuyuna Lakes Mountain Bike Crew members (identifiable by their bright red crew shirts), mountain bike enthusiasts, state legislators, and local elected officials steadily grew in number. This wasn’t just any gathering—this marked a momentous occasion for the trail system by cutting the ribbon to the Sagamore Unit and opening a new 7-mile adaptive hand cycling trail that significantly increased accessibility by providing recreation opportunities for people without the use of their legs. The new unit was the main event, but they were also celebrating new signage and amenities that increase safety and accessibility for people new to mountain biking. These improvements were made possible in part by $1.6 million from the 2017 legislative bonding appropriations and $1.2 million from the Clean Water, Land & Legacy Amendment. 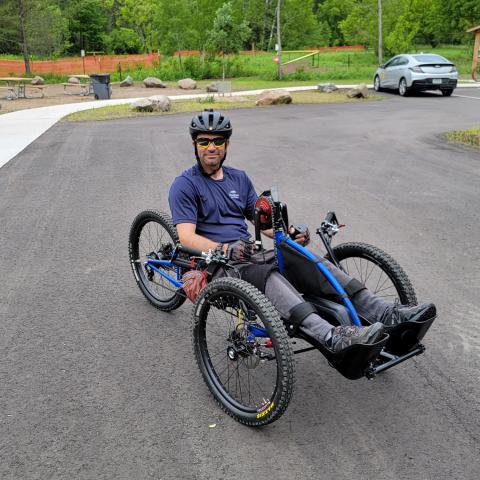 On my way to lunch with Aaron, I couldn’t help but notice that nearly every store along main street was occupied and that they have some impressive murals celebrating both their mining history and their love of outdoor recreation. As we sat down on the outdoor patio at one of the local restaurants, Aaron told me that 12 years ago, the patio was a burnt-out alley littered with a few old cars. He also told me about the difficult transition the community has faced since mining left the area in 1984.

Crosby and the surrounding communities in Cuyuna Country had been in steady decline once the mine closed until the Environment & Natural Resources Trust Fund (ENRTF) provided $590,000 to acquire 87 acres of private land within the Cuyuna Country State Recreation Area. The investment paved the way for the trail system we know today. In 2011, the DNR opened the first 25 miles of mountain bike trails. 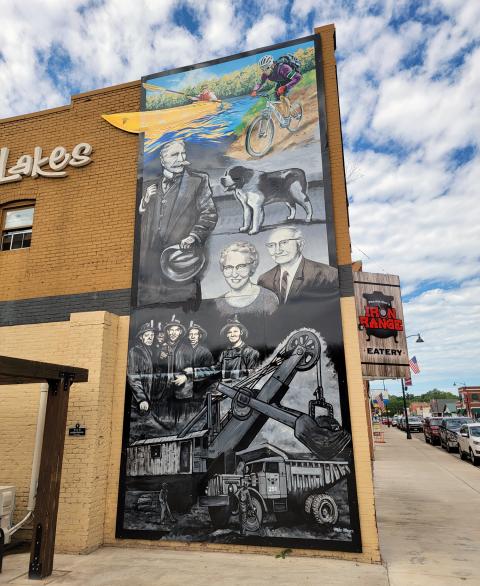 Mural depicting the history of the region

Aaron saw more potential than just the initial 25 miles of trails and began the hard work of convincing others that more had to be done. Over the years, Aaron and the countless dedicated volunteers who gave their money, time, and expertise worked to create a world-class mountain bike experience. Literally, they gave their blood, sweat, and tears to this work, and it’s paying dividends. With the help of many partners, they were able to increase the number of trails to the current 70 miles available today and helped create an identity and outdoor industry centered around the trail system. Aaron tells me that the community saw an opportunity for a quality of life, or, as he often likes to say, “a 21st-century vision for a 21st-century Cuyuna.” An economic study commissioned by trail advocates and residents confirmed this vision. The study found that expanding the trail system could have a $21 million annual economic impact on the region.

As Aaron addresses the celebratory crowd, he ponders out loud, “Why stop here?” Not only has this success made clear how outdoor recreation can turn a community around and provide a quality of life, but trail advocates and visionaries like Aaron know that it can bring young professionals, entrepreneurs, and businesses back to the region. They’ve already begun to experience it.

As Aaron, Senator Carrie Ruud, Representative Dale Lueck, and others made clear to the crowd at the Sagamore Unit ribbon cutting, the dream will not end here. Aaron talked about expanding the trail system for portaging and hiking and even hosting scuba diving at the many flooded mine pits scattered around the area. Senator Carrie Ruud talked about bringing national and international snowshoe racing events to the community. As Aaron put it in his speech, they see an opportunity to create a “baby Boundary Waters” where folks can come and try out the experience first (with cell service) before committing to the real thing. It’s clear, just like the water in the mine pit lakes, that the future is bright for Cuyuna Country. 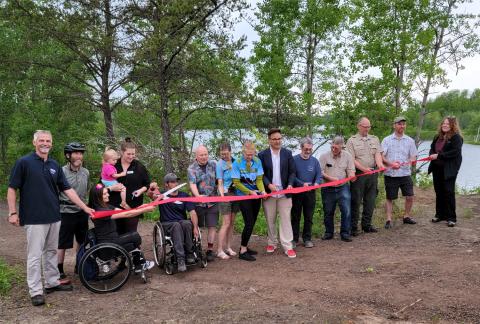 The initial stretch of bike trails was funded by the Environment & Natural Resources Trust Fund (ENRTF), which has been supporting conservation projects around Minnesota since it was first approved by voters in 1988 as a constitutional amendment to direct Minnesota state lottery proceeds toward the public purpose of protecting, conserving, preserving, and enhancing Minnesota’s natural resources. Since 2010, the ENRTF has appropriated over $425 million toward over 700 projects across Minnesota. The dedication of lottery funds is set to expire in 2025. The Legislature should pass a ballot measure to reauthorize the continual dedication to prevent the loss of this funding source which would be a major setback to expanding and enhancing our most cherished outdoor spaces.

Conservation Minnesota has been working with our partners to lead the charge on permanently reauthorizing ENRTF so that future generations can experience a better quality of outdoor recreation and access than we have today. To get involved in the effort to renew the ENRTF, reach out to me at: avery@conservationminnesota.org